This article is part of one or more series: Transparency

Our interactive debt obligation site can be found here, along with all of our other financial transparency information. 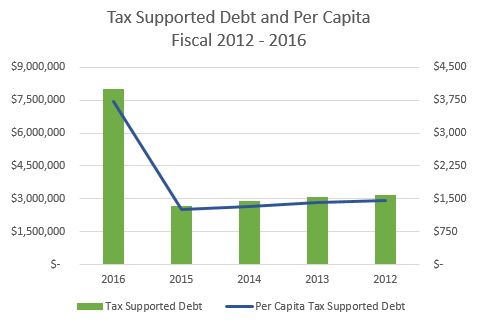 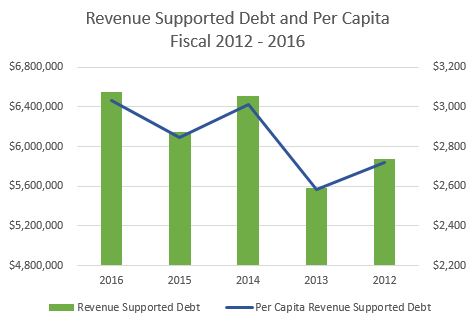 Per Capital figures based on a 2016 estimated population of 2,160

The City's debt is comprised of certificates of obligations and one general obligation refunding bond, all of which did not require voted approval. The outstanding debt was authorized as follows:

On October 25, 2007, the City authorized the issuance and sale of $1,800,000 Combination Tax and Revenue Certificates of Obligation, Series 2007.  The certificates were issued for paying, in whole or in part, the City’s contractual Obligations incurred to acquire and construct street, bridge, curb, and sidewalk improvements, together with utility relocation and drainage improvements incidental thereto, pay for professional services rendered in connection therewith and paying for costs of issuance.

On April 26, 2012, the City authorized the issuance and sale of $2,910,000 Certificates of Obligation, Series 2012 with an interest rate of 2%-3.5%. The certificates are split between the governmental and business-type activities at approximately 27% and 73%, respectively. The bonds were issued for paying the U.S. 180 middle median improvements, the loan payable to Parker County Special Utility District, improvements to Red Eagle water facility, improvements to the City’s water metering system, a replacement of a water well, and a water system study.

On August 15, 2010, the City authorized the issuance and sale of $2,915,000 Combination Tax and Revenue Certificates of Obligation, Series 2010 dated September 20, 2010. The Certificates were issued in connection with the acquisition of the Dyegard Water System. Surplus revenues from the Dyegard water system are pledged to the payment of the bonds.

On May 15, 2014, the City authorized the issuance and sale of $1,235,000 Combination Tax and Revenue Certificates of Obligation, Series 2014 dated June 12, 2014.  The Certificates were issued in order to acquire, construct, expand and equip extensions and improvements to the City’s sanitary wastewater system including, but not limited to, an expansion of the wastewater main south of I-20 from Lakeshore Drive to Parker Oaks Drive and the acquisition of easements, the installation of a lift station, and the construction of a gravity main and a force main related thereto.

On May 5, 2016, the City authorized the issuance and sale of $4,745,000 Combination Tax and Revenue Certificates of Obligation, Series 2016A dated June 1, 2016.  The Certificates were issued in order to raise the necessary funds for the City portion of the IH-20 Interchange at CenterPoint Road, the upcoming Oykey Corridor development and overages in the Lakeshore Bridge project.

On May 5, 2016, the City authorized the issuance and sale of $1,540,000 Combination Tax and Revenue Certificates of Obligation, Series 2016B dated June 1, 2016.  The Certificates were issued in order to raise the necessary funds for improvements to the City’s infrastructure fiber internet system.

To view the documents created in compliance with HB1378 on debt transparency, click here.

The City of Hudson Oaks currently does not have an ad valorem tax. Even though all the debt is backed by an ad valorem tax, the City does not levy one. Surplus revenues generated by sales tax and revenue by the various water and wastewater systems support the outstanding debt.

Bond restrictions demand the City must create and maintain certain accounts or funds to receive the proceeds from the sale of the bonds and to account for the revenues which are pledged for payment of the bonds. The assets can be used only in accordance with the terms of the bond ordinance and for the specific purpose(s) designated therein.

The City is generally required to make an annual transfer to debt service funds equal to the next interest and principal payment. The bonds may be redeemed prior to their maturities in accordance with the bond ordinances in whole or in part in principal amounts of $5,000 or any integral multiple thereof. During fiscal year 2016 the City has complied with the requirements of all bond ordinances and related bond restrictions.

There is no statutory debt limitation in the City Charter or under State law. The City Charter provides that the total debt of the City shall not exceed that provided by state law. Under the provisions of State law (Article XI, Section 5, of the State of Texas Constitution), the maximum tax rate is limited to $2.50 per $100 assessed valuation. The City currently does not levy an ad valorem tax.  Debt service to total general expenditures for fiscal year ending September 30, 2016 was 13.78%.

The Municipal Securities Rulemaking Board’s (MSRB) Electronic Municipal Market Access (EMMA) website publicly displays continuing disclosures that are provided either as required disclosures by municipal issuers and other parties known as “obligated persons” or “obligors” under contractual agreements entered into under Rule 15c2-12 of the Securities Exchange Act of 1934 (Exchange Act) or as voluntary disclosures by issuers and obligated persons without a contractual obligation to do so. Continuing disclosure consists of important information about a municipal bond that arises after the initial issuance of the bond. This information generally would reflect the financial or operating condition of the issuer as it changes over time, as well as specific events occurring after issuance that can have an impact on the ability of issuer to pay amounts owing on the bond, the value of the bond if it is bought or sold prior to its maturity, the timing of repayment of principal, and other key features of the bond.

Here in the city of Hudson Oaks, we pride ourselves in our community. Whether you're looking to join our community or you've been here for years, use the form below to let us know if there is anything we can do to make our city better.